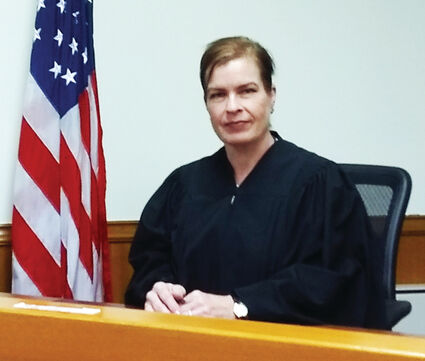 A 1997 University of Puget Sound (now Seattle University) School of Law graduate, she is a member of the bar associations in Alaska, Montana, Oregon and Washington.

While in Alaska, she worked as clerk, deputy district attorney, assistant attorney general and magistrate.

When her husband's occupation took them to Montana, she passed the bar exam there, and practiced family law and criminal defense. She accepted a position as a deputy prosecuting attorney in Adams County 4.5 years ago, working in the juvenile justice system, mostly in Othello. She also prosecuted state Department of Fish and Wildlife cases, such as trespassers who hunt on private property.

An owner of acreage and livestock herself, she said she understands the importance of property rights.

As the District Court judge, she notes the high case volume associated with traffic cases on Interstate 90. She said the court in Ritzville handled over 4000 traffic cases in the last year.

Asked about changes or improvements in the court, she pointed to coordination with District Court Judge Carolyn Benzel in Othello.

As a former prosecuting attorney, there are cases which come before her court, which she cannot preside over because of past associations with those involved in the case, she said. When that happens Benzel stands in, and vice-versa.

She said the Adams County Commission unified the two District Courts' jurisdictions in 2019, but there are still some forms that need to be standardized.

She said "unified forms will make it easier for citizens to access the court."

Judge Russell and her husband, Nick, have 2 children.