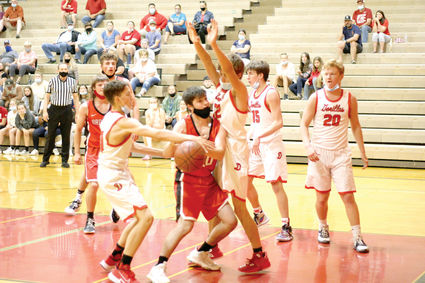 Cooper Miller, a sophomore on the Broncos' varsity team, is double-teamed by Davenport defensive players during a play-off game in Davenport Monday, June 14.

DAVENPORT – The Lind-Ritzville-Sprague Broncos ended their boys basketball season with a 59-45 loss to Davenport during a play-offs game Monday, June 14.

"We got off to a good start and led 11-4, but we really struggled on both ends of the court after that, and Davenport started pulling away late in the third quarter," said Head Coach Dustan Arlt. "It was probably the most we struggled all year in a game, and the first one we weren't right in it at the end."

The Broncos finished their shortened season of winter sports with a 6-5 overall record and 5-4 (five wins, four losses) in league ga...