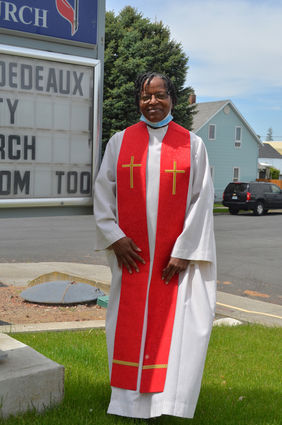 Ella DeDeaux, formerly of Mississippi and now an Odessa resident, is the new pastor at Trinity Methodist Church in Ritzville.

DeDeaux and her husband James DeDeaux moved from Mississippi to Odessa at the end of 2019, when James was hired as a mental health therapist at the Odessa Clinic.

Before the move, Pastor DeDeaux was pastor of two United Methodist churches in Pass Christian, Mississippi. She said she and her husband attended Trinity Methodist before Pastor Michelle Mitchell asked her to take over her role in the church.

DeDeaux became a pastor in 2013. Prior to that, she worked as a teacher, mostly in elementary schools. She said she was drawn to the ministry when she retired from teaching after 29 years.

DeDeaux said after she realized she was called to preach, it took her another year to figure out what that meant.

"I cried and asked God, 'What are you doing? What is this about?'" DeDeaux recalled. "I was brought up in a church where we were taught pastors save people, and that was a heavy weight on my shoulders. One day I told a friend I was called to pastor, but it felt like a heavy weight. She said, 'All you have to do is preach, because God has saved everybody already.' The weight was lifted, and I knew I could do this."

DeDeaux said she wanted small churches, so she could know everybody.

"When I started here, I was asked, 'Do you visit?' I said, 'How do you pastor without visiting?'" DeDeaux said. "I started making appointments to visit members of the church who can't come, whether due to illness or other things. That is an important part of the service that you give as a pastor."

Besides Sundays, DeDeaux can be found at Trinity Methodist Church on Mondays and Tuesdays. The rest of the week, she is involved with volunteer services in Odessa, where she visits residents of the long term care facility and assisted living. She is also a member of a Moms in Prayer group in Odessa.

"In Mississippi, my husband and I did jail ministries," DeDeaux said. "We haven't connected to the jail here yet, but we hope to."

DeDeaux said services in the summertime, starting the first weekend in June, are held at 9:30 a.m. instead of 11 a.m. Trinity Methodist Church is at 201 S. Washington Street.