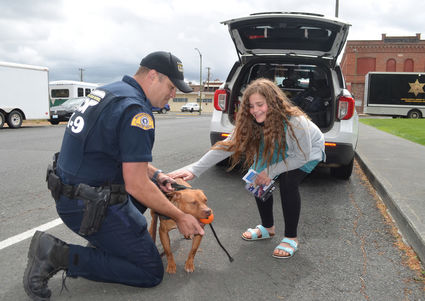 Gina Smith, a student in Mrs. Terris's class, was thrilled to meet K-9 Ginger. Trooper R. Elkins, with the State Patrol out of Spokane, traveled to take part in Law Day with several other law enforcement officers.

In Superior Court, students in Mrs. Gingrich's class tried classmate Karsen Stokoe for allegedly stealing a hat. His jury came back unable to reach a verdict, with 11 having found him guilty, and one juror voting not guilty.

"You have to get a unanimous verdict i...