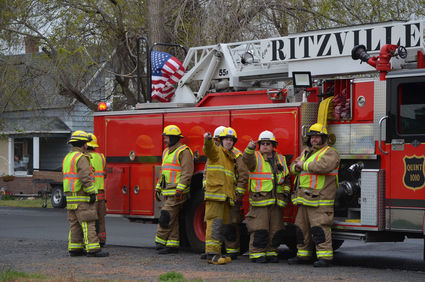 Chief Scott Kemble and Bob Dew point to other electrical lines near the blown transformer as volunteers wait in the rain for an Avista lineman to arrive Saturday, April 24.

RITZVILLE - Chief Scott Kembel and half a dozen volunteer firefighters responded to a call at 203 West Cherry Avenue when a transformer on a power pole blew Saturday afternoon, April 24.

Neighbor Bruce Johnson, of 204 West Cherry Avenue said he didn't see it happen, but he heard it.

"It scared the heck out of me," said Johnson, adding his neighbor from 203 West Cherry Avenue came to the door and said she smelled smoke, asking him to call her daughter.

Johnson said he was told by the firemen, "Every time we have a dry spell and then rain, transformers blow up....