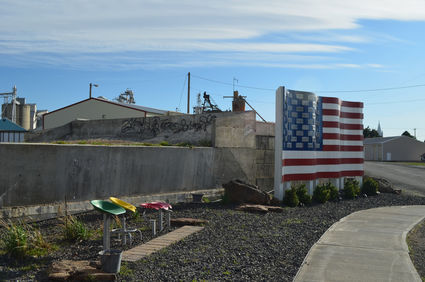 Graffiti included this wall behind the American Flag metal art in the 500 block of East Main.

RITZVILLE – Vandals tagged businesses with graffiti and several Storywalk installations on the walking path between town and the fairgrounds.

"We have a person of interest in this case. He's not from Ritzville and was in town Saturday. We didn't see him Sunday," Carlson said. "He does have a long list of other crimes."

Carlson said if caught, the subject would be charged with malicious mischief in the third...