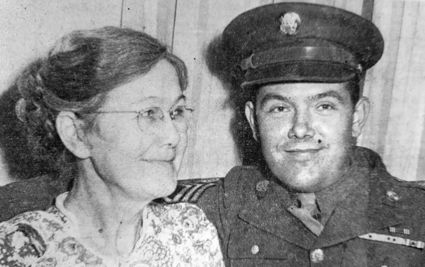 A photo from 75 years ago - FREE MAN ONCE AGAIN! S/Sgt. Herbert Kent of Benge is home after 40 months as a Japanese prisoner with a harrowing tale of his experiences. Posing with him is his mother, Mrs. C. H. Kent.

The election of Tuesday was a literal Republican landslide. Harding and Coolidge have been elected president and vice president by probably the largest vote in the history of the country. The result is doubtful in the following states: Arizona, Oklahoma, New Mexico and Tennessee, and leaving these states out, Harding and Coolidge have 389 electoral votes and Cox and Roosevelt 142. Republican candidates carried every northern and western state with the possible exception of the states...