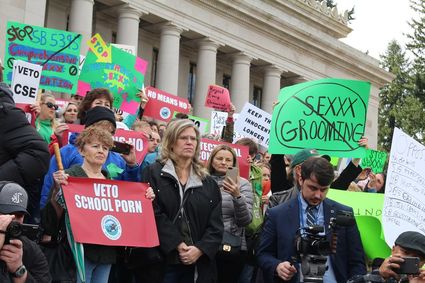 Residents and parents turned out to Olympia last Wednesday to protest Senate Bill 5395, which passed the House and Senate. The measure requires "inclusive" sexual education for children as young as kindergartners.

OLYMPIA - Despite the governor's warning to avoid crowds in the wake of the coronavirus, hundreds of concerned parents and residents converged on the Capitol last Wednesday to protest the passage of a law requiring comprehensive sex education from kindergarten through 12th-grade.

Among the provisions of the so-called "inclusive" law, were mandates to include age-appropriate and medically accurate information on heterosexual intercourse, gay, lesbian and transgender sexual contact, among other alternative lifestyle interactions.

The Informed Parents of Washington organized the protest in an effort to urge Gov. Jay Inslee to veto the controversial Engrossed Substitute Senate Bill 5395, which was passed by the Democratic majorities in both the senate and house and awaited his signature.

Parents and children held signs urging the governor to veto the bill, which has been dubbed by many as the "seXXX ed" bill.

Many Republican senators and representatives showed up to speak against the sex ed bill.

Rep. Tom Dent, R-Moses Lake, said he had issues with the "pornographic" nature of the curriculum, which he said will be pushed on young kindergarteners.

"Why do we want to take their innocence?" Dent asked the crowd, implying that exposing children to sexual material at such a young age would not be appropriate.

Some parents, like Karen Larsen from Auburn, said they believe this legislation is a state government overreach.

Larsen said that, while she does not agree with the content of the curriculum, her biggest issue is that the policy usurps local control over education and curricula.

Sen. Tim Sheldon, D-Potlatch, also spoke to the crowd, claiming he was the only Democrat to vote against the bill.

Representatives such as Jesse Young, R-Gig Harbor, and Jim Walsh, R-Aberdeen, urged voters to remember their frustrations with the Democratically-controlled Legislature come election time in November.

The bill was pushed through this year at the behest of Sen. Claire Wilson, a Democrat and openly gay lawmaker from Federal Way.

Wilson said her bill was designed to be inclusive of all children, no matter their sexual orientation.

She pushed the bill last Pa, but overwhelming parental opposition halted her efforts. That defeat followed her resignation from the Federal Way School Board, where she came under fire for her efforts to ferry the bill through the legislative process.