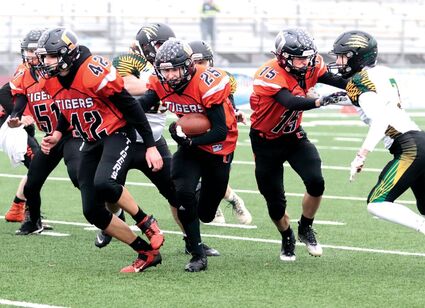 Odessa running back Gage Starkel breaks through the gap opened in the defensive line by Dakota Steward (No. 42) and Cobryn Neilsen (No. 15).

MOSES LAKE - Liberty Bell will make its first appearance in a state title football game after upending No. 1-ranked Odessa, 70-24, on Saturday, Nov. 26 on Lion's Field.

Mountain Lion Coach Jeff Lidey credited the win to having a healthy team and focusing on the Tigers' key playmakers - quarterback Collin Martin and running back Gage Starkel.

"They have a team for full talent, but those two boys have been carrying the team for a long time," Lidey said.