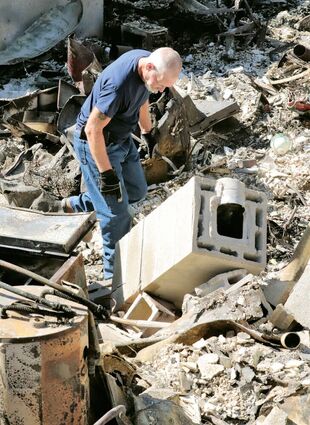 In the aftermath of the Aug. 4 wildfire, a local man searches for salvageable items in the debris of a South Van Marter Drive home. See more photos on page 3.

LIND - A series of fires broke out last week across Eastern Washington, including a blaze that destroyed several homes and outbuildings in rural Adams County and the Lind area on Thursday, Aug. 4.

While the fast-burning blaze was short-lived, it destroyed six homes and multiple outbuildings, Federal Emergency Management Agency officials said Friday, noting it had been declared as a disaster.

With the declaration, the federal Disaster Relief Fund can be used to help cover firefighting costs. In addition, more than $1 million may also be made available through the state's Hazard Mitigation Gr...