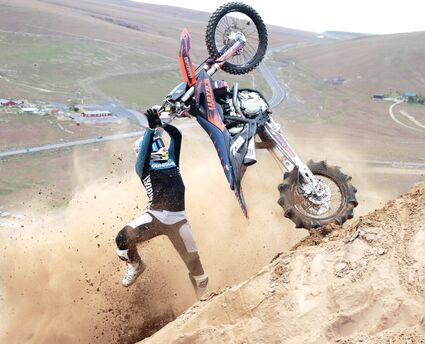 Bronson Foianini flips over backward while trying to make it to the top in the Washington Nitro Nationals Hillclimb race on Sunday, May 8.

VERNITA - More than 1,000 hillclimb racing enthusiasts turned out Saturday, May 6-8, for the Washington Nitro Nationals.

At the Nitro Nationals, riders pit their skill and motorcycles against a 1,000 foot course. Many of the motorcycles are powered by nitrous oxide and methanol.

Anstett broke the 20 second mark in the open class.

Several Eastern Washington racers were among the field, including Molly Weddle of Prosser.

Activities opened with pit bike racing on Friday nigh...