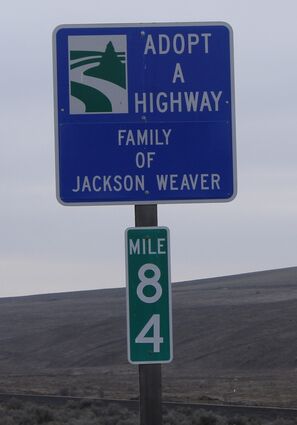 A stretch of highway near Lind adopted by the Weaver family.

MONROE – A memorial scholarship is being established in the name of Jackson David Weaver, who passed away from leukemia on Dec. 16, 2006.

Jackson's father, Reid Weaver, is a 1979 graduate of Lind High School, a retired police officer from the city of Monroe and a former instructor at the Washington Police Academy.

His father was a school principal in Warden and mother worked as a Nurse in Moses Lake. In addition to Jackson, Reid and his first wife, have two other grown children.

Travelers on U.S. Highway 395 near Lind may have seen a stretch of highway adopted by the Weaver family.