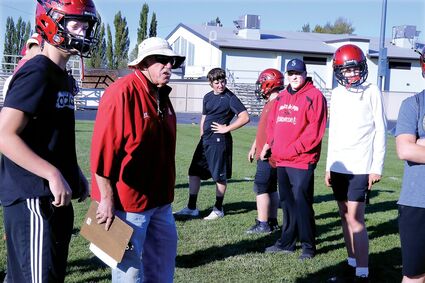 The Broncos practice Monday for the upcoming home game versus Reardan.

MEDICAL LAKE – The Lind-Ritzville/Sprague Broncos cruised to an easy win while putting on an offensive display at Medical Lake, Friday night, Oct. 8.

The Class 2B, No. 1-ranked Broncos won, 62-34, in a non-league contest over the Class 1A Medical Lake Cardinals.

"We had a really nice game, offensively," Coach and Athletic Director Greg Whitmore said of the win.

"Medical Lake's size on the offensive line gave us problems and we had a hard time stopping their rushing attack," he said.