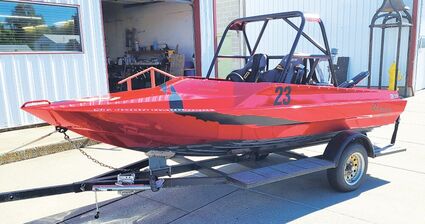 Dangerous Curves waits on a trailer for a test run.

WEBB'S SLOUGH - A debut is in the making for the next sprint boat races in St. John on Aug. 28.

Dangerous Curves is a team of locals, Mike Thomas and Clint O'Keefe, who formed last year and waited out the pandemic-canceled 2020 season.

Then the night before the opening race at Webb's Slough in June, they put the boat in the water for a test run and it did not go as they hoped.

The boat sucked in water, ruined two pushrods, and bent a valve.

No racing for them and their debut was delayed.

Since then, Thomas and O'Keefe took the engine out of the boat and...