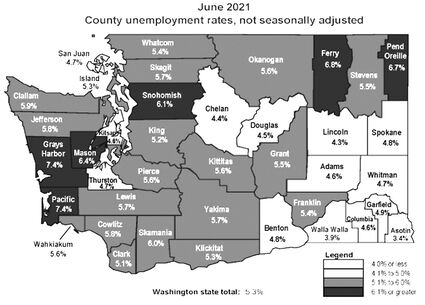 RITZVILLE – The Adams County jobless rate was among the lowest in the state during the month of June.

In a report released last week by the state Employment Security Department, Adams County showed a jobless rate of only 4.6%.

That's tied for the sixth lowest unemployment rate in the state's 39 counties, the report shows.

The state reported 9,830 residents in the work force in the county, with 9,379 residents employed, the report shows. That left only 451 adults in the workforce jobless during the month of June.

Counties with a lower jobless rate for June included Asotin at 3.4%, Walla W...