Man remembered for service to country and community 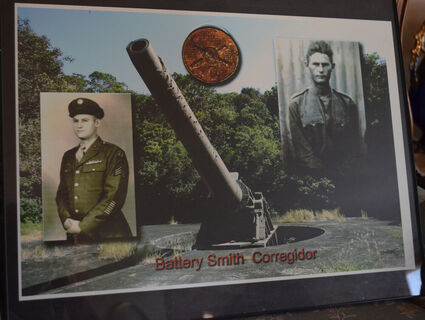 This framed photo of Battery Smith on Corregidor, manned by the 59th Artillery Rudy Thaut was assigned to, shows photos of Thaut when he enlisted at 180 pounds, and Thaut at war's end at 113 pounds. According to Traces of War, during the siege of Corregidor, a bomb hit the racer of Smith, but it was repaired and put back into operation.

RITZVILLE - Rudy Thaut is remembered as a man who served his community after service in the U.S. Army that included 42 months as a prisoner of war in a Japanese prison camp.

"Rudy gave so much to this town and his country, and he never wore it on his sleeve or expected much," Senator Mark Schoesler said. "The thought of Rudy Thaut saying you owe me, or the U.S. owes me, was unconscionable. He was a great American."

Schoesler got to know Thaut through his lifetime service to the community of Ritzville, including volunteer work with the Zion Congregational Church, the Boy Scouts and Little Le...