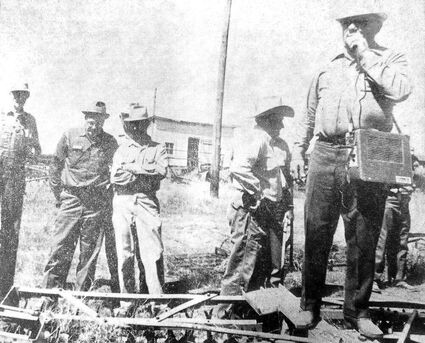 A photo from 50 years ago - Auction Held at Scheel's – Auctioneer Cliff Williams gets $275 for a Maximulcher cultivator at Monday's farm auction of the Dean Scheel estate. A sweep or chisel cultivator brought $500 but a combine 14 feet wide sold for only $200. – Journal-Times photo

Every individual who drives a motor vehicle has to have an operator's license. Get a blank at any garage or at the county offices and fill it out and send it in with a money order of some kind to the State Treasurer, License Division, Olympia, Wash. It is necessary to have two people sign your application asserting that you are a competent driver of a motor vehicle. Drivers must have these licenses by August 1st. They are good for two years.

HATTON - Seventy-five members of the Paramount studios in California are expected to arrive at the Sam and Dan Lyle ranch Friday morning to begin work on a technicolor film of the wheat harvest. Eight Massey-Harris combines will be in operation at one time along with the number of trucks needed to handle the hauling. The combines are being furnished Earl and Norman Wirth, Sam and Dan Lyle, J.T. Harmon, Don Mittelsteadt, Herman Klindworth and Paul Flowers. The picture, it is understood here, will be a full length feature and is supposed to represent the rolling wheat fields of Kansas.

Prices and total sales revenue exceeded his best expectation, Carl Heinemann said Tuesday of the Dean Scheel estate farm auction Monday. Attendance at the auction two miles south of Ritzville along U.S. 395 was variously estimated at 300 to 500 persons. Interest in antique and pioneer-type household items was especially keen. Dean's parents and grandparents were pioneers of the area. Mr. and Mrs. Dietrich Ahlers homesteaded in 1887 on the farmstead where Monday's sale was held. Their daughter Minnie was married to Will Scheel. In 1918 this couple built the home standing there now. Dean was a son of the Will Scheels.

A late afternoon fire on Tuesday, July 2, destroyed 600-640 acres of pasture east of the Tom Harder residence. Ritzville Rural Fire Chief Dent Atkinson said the fire was in the Benge district but was answered by 15 trucks, including five from Ritzville and five from Benge. Also responding were trucks from Jake Harder, Bill Harder, Willard Hennings and a Cenex water truck of which Atkinson