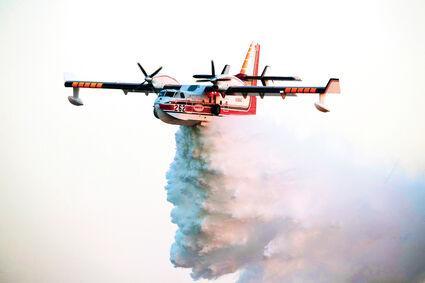 An engine air tanker, or Air Boss, makes a drop over the fire near Fishtrap Lake Sunday, July 11.

Fishtrap Lake is a reservoir located about 15 miles from Cheney in Lincoln County.

"I haven't gotten a morning update yet, but we had it knocked down pretty well under control," Lowry said early Monday morning, July 12, adding DNR and BLM crews mopped up overnight.

Lowry said he had seven trucks at the fire with at least two volunteers on each truck.

"I also had one truck that came...