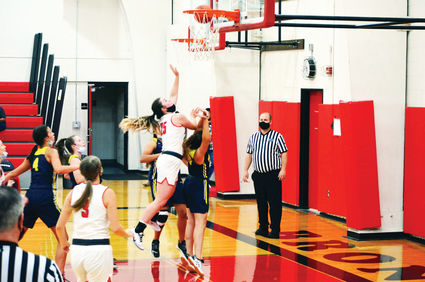 Juliia Klein raises the score 37-26 in the Broncos' favor during Thursday's game against Kettle Falls.

RITZVILLE – The Lind-Ritzville-Sprague Broncos took second place in the NE 2B League Basketball Championship when they fell to the Liberty Lancers 46-77, at home Saturday, June 19.

"We just couldn't shut them down," Head Coach Steve Wellsandt said of the Lancers. "They shot 58% from the 3-point line. We were just under 40% for 3-pointers, but on 2-point field goals we were just under 30%. So it was not a good shooting night inside the paint."

Dakota Killian led in scoring for the Broncos with 15 points, followed by Janaye Wilkie with 11. Grace Fedie had 9, Julia Klein 6, and Sydney Kinch...