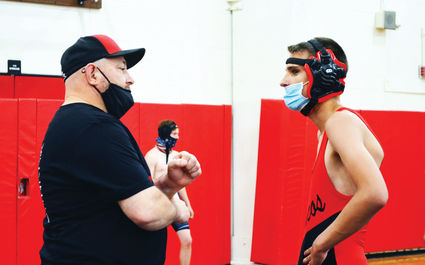 Brandon Davis, seen here getting tips from Coach Jason Hilzer during the Broncos' only home match this year, took first place in the league championship Friday.

Davis was in his sophomore year and Smith was a freshman.

"This is Gabe's first year wrestling," Head Coach Jason Hilzer said. "He turned out last year halfway through the year, so he only got four matches. So between the two years, he got one full season. He didn't wrestle as a little guy. Brandon wrestled last year, and has been wrestling for me since he was an 8th grader."