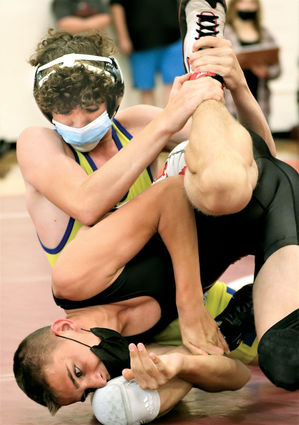 Brandon Davis works a single leg on Jacob Sisk of Colfax. Davis won the match by a pin in the third round.

REARDAN – The Lind-Ritzville-Sprague Broncos traveled to Reardan Thursday, May 27, for a tournament with Garfield-Palouse, Colfax, Liberty (Spangle), Reardan, Davenport and Pomeroy.

Head Coach Jason Hilzer said Brandon Davis wrestled and beat Jacob Sisk of Colfax by pin the third round, then wrestled Hamilton of Reardan and won by pin in the first round.

"Brandon's third match was against Rinehart of Reardan, and Brandon won by pin in the second round," Hilzer said. "Sam Michels was the other wrestler who wrestled yesterday."

Michels's first match was against Bjornborg of Reardan, which...