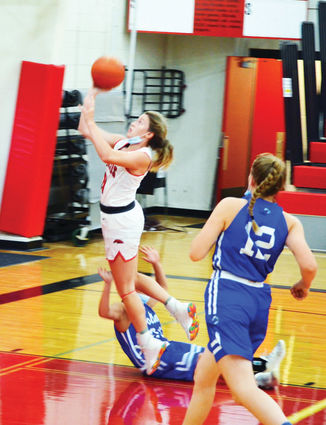 Janaye Wilkie puts in two points for the Broncos, bringing the score to 15-20 in the Wildcats' favor early in the second quarter.

RITZVILLE – The Lind-Ritzville-Sprague ladies lost a home game to Colton by just three points Tuesday, May 25.

Grace Fedie hit a three-point shot in the last seconds to close the gap 49-52.

The Wildcats, despite their smaller size, sunk 11 three-point shots. For the Broncos, Dakota Killian, who led in scoring with 15 points, hit one three-pointer; Fedie, with eight points total, put in two; and Julia Klein, with 10 points, put in one.

Colton Head Coach Clark Vining said he was used to teams being tal...