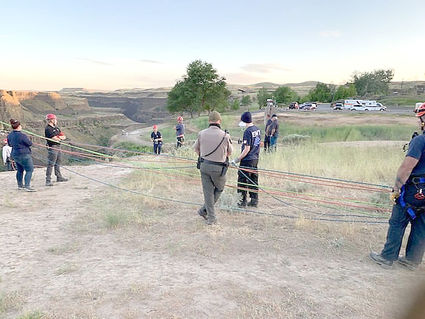 Rescuers prepare to hoist an injured hiker from a trail near the bottom of Palouse Falls on Tuesday afternoon.

PALOUSE FALLS - A hikers was airlifted from Palouse Falls State Park to an area hospital Tuesday afternoon after he was knocked unconscious by a falling rock and hoisted from the waterfall basin.

The man and his wife were hiking near the bottom of the falls when a rock "described as being the size of a football" fell and struck him, knocking him unconscious, the Franklin County Sheriff's Office reported.

The 28-year-old man, whose name has yet to be released, was hoisted out of the waterfall basin to an awaiting helicopter, the Sheriff's Office reported.