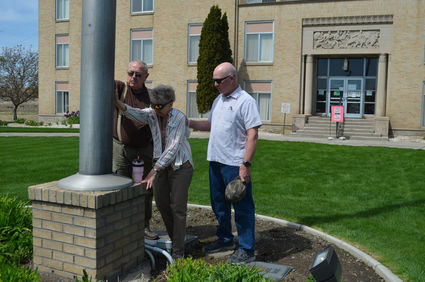 Ritzville citizens, from left, Barry Boyer, Dede Boyer and Pastor Bill Cox of the Foursquare Church in Ritzville and Odessa pray for the nation, it's leaders, community leaders and citizens below the American Flag at the Adams County Courthouse Thursday, May 6.

RITZVILLE – The 70th annual National Day of Prayer was observed Thursday, May 6. Barry and Dede Boyer, and Pastor Bill Cox of the Foursquare Church in Ritzville and Odessa, gathered below the flag at the Adams County Courthouse to share prayers for the nation, it's leaders, community leaders and citizens during the noon hour on the historic national holiday.

The observance of the National Day of Prayer moved to the first Thursday in May under President Ronald Reagan, and has remained on that day since.

National days of prayers or thanks have been observed since before the country's existence. According to National Day Calendar, the Continental Congress issued a proclamation calling for a "day of public humiliation, fasting and prayer" July 20, 1775.

George Washington called for a day of public thanksgiving and prayer in 1795. John Adams declared May 9 to be a "day of solemn humility, fasting, and prayer" in 1798. During the Civil War, Abraham Lincoln signed a Congressional resolution calling for April 30, 1863 to be a day of fasting and prayer.

Next year's National Day of Prayer will be held Thursday, May 5.