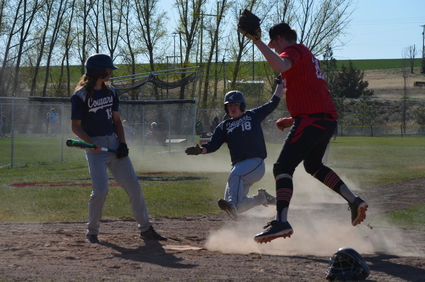 Pitcher Josh McClure covers home plate to tag out Chewelah's Jack Carpenter for the third out of the first inning in the second game of a doubleheader April 20. Also pictured is Chewelah's J.D. Konold.

RITZVILLE - The Broncos took on Chewelah's JV team Tuesday, April 20, beating them 4-0 in the first five-inning game and 10-5 in the second game.

"We are playing better and our pitching is starting to come around," Head Coach Jason Hilzer said.