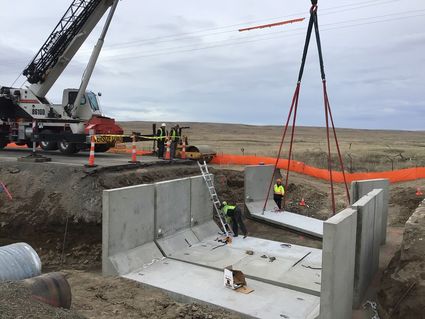 Shamrock Paving Inc./Murphy Brothers was awarded the contract to replace the McElroy Coulee bridge south of Ritzville on Highway 261. Pictured working on the project March 25, from left, are Kevin Burg from Shamrock Paving, Dusty Thompson from Barnhart Crane, and Hayden Kapiko and Austin Floener with Shamrock Paving.

RITZVILLE – The dilapidated McElroy Coulee Bridge south of Ritzville on Highway 261 is getting replaced.

The bridge is located at milepost 57.7, at the junction of Leisle Road and Highway 261, in between Harder Road to the north and Franz Road to the south.

The contract was awarded to Shamrock Paving Inc./Murphy Brothers of Spokane, who began the project March 8.

"The project is ahead of schedule and on budget," Project Superintendent Randy Wicks said.

According to Department of Transportation documents, the current bridge became structurally deficient and plans were made to replace it...