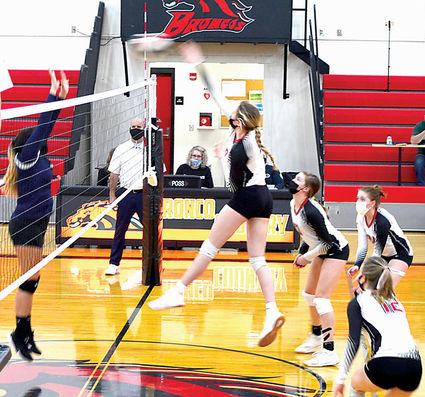 Dakota Killian sends the ball over the net in the first set against Kettle Falls Saturday.

"Communication was better and we had a controlled game," Lind-Ritzville Coach Cari Galbreath said. "We didn't show up to play," Davenport Coach Heather Jacoby said.

Taylor Galbreath led the Broncos with 12 aces, eight kills and 10 assists. Janaye Wilkie and Grace Fedie had six digs each. Dakota Killian and Sydney Kinch each had one block.

For Davenport, Haley Greenwood had four digs and two kills; and Kylee Buchanan had three aces.

The Broncos also swept the Bulldogs when they ho...