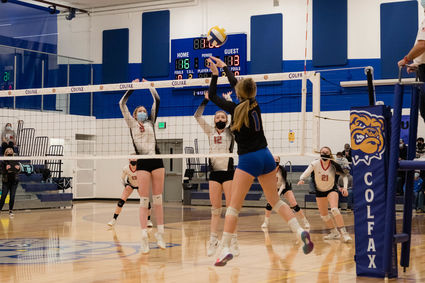 Broncos defend the net during Tuesday's game at Colfax while Coach Cari Galbreath looks on.

COLFAX - Coming off a sweep of Davenport in the season-opener, the Lind-Ritzville/Sprague Broncos (1-1) dropped three in a row to the host Bulldogs on Tuesday night, Feb. 23.

"It was great for our first night out," Colfax Coach Brandy Brown said after the win.

Individual stats for the Broncos were not immediately available.

The Broncos will travel to Upper Columbia Academy (1-0) on Thursday...