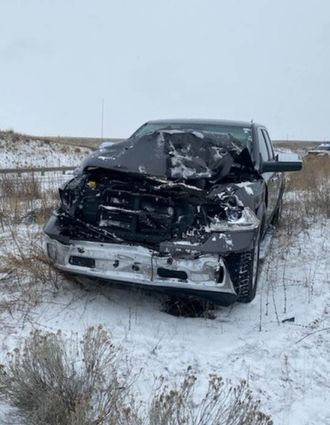 RITZVILLE – Snow fell heavily throughout the region over the weekend. Interstate 90 was blocked in the left lane Monday from a semi trailer that landed on its side near milepost 229, approximately seven miles east of Ritzville. No one was injured in the collision, which occurred shortly after 6 a.m. The left lane remained closed until around noon.

Responding to the call were crew members from WSP, Washington State Department of Transportation and Adams County Fire Department.

A collision earlier in the weekend occurred on U.S. 395 south of Ritzville when a pickup truck hit a snow plow f...