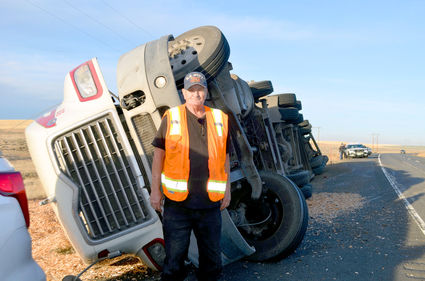 RITZVILLE – U.S. Navy veteran and truck driver Terry Janssen of Post Falls, Idaho, was un-injured when the semi he was driving southbound on Highway 395 rolled over, five miles south of Ritzville Wednesday, Oct. 28.

Washington State Patrol responded to the incident that occurred around 3:30 p.m. at milepost 90.5. No other vehicles were involved, and travel lanes remained open.

Janssen, driving for XL Transport, was hauling a load of Cedar chips from Ritzville to Wallula.

"I reached down on the floorboards for a bottle of water, and there I am," Janssen said shortly after the wreck.