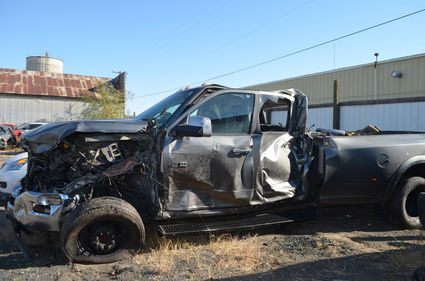 This 2012 Dodge truck driven by James Noyes of Billings, Montana, rear-ended a Nissan Altima stopped due in front of it, before striking the trailer of a semi and coming to rest in the northbound lanes of Highway 395 according to Washington State Patrol officials. Noyes was transported to Othello Community Hospital. The Dodge was towed from the scene by Pete's Towing of Ritzville.

Stephan W. Meuchel, 44, of Longview, was charged with second-degree negligent driving after his northbound 2018 semi left the roadway near Milepost 63, about 8 miles north of the city in rural Adams County, the Washington State Patrol said.

The crash occurred about 7 p.m.

Meuchel allegedly over-corrected and slid broadside before his truck came to rest on its top on the northbound right shoulder, the patrol said.

He was not wearing a seatbelt and was in...