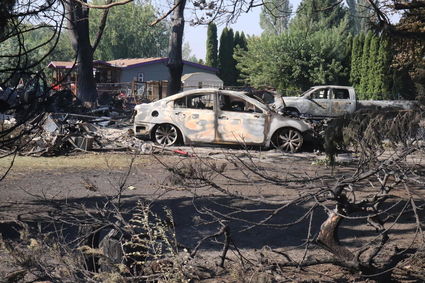 A burned-out car sits near near what used to be a home at the intersection of West Canal Boulevard and Loen Drive in Basin City.

BASIN CITY - A wildfire raced along the edge of the city Monday, Sept. 7, destroying at least two homes.

The homes were located along North Canal Boulevard and Loen Drive, but winds driving flames nearby fields of dry grass and sagebrush also spread the fire to the structures and vehicles parked nearby.

According to the Franklin County Sheriff's Office, nobody was injured.

Meanwhile further east in the county, flames from another fire rapidly moved through dry fuels near Pasco-Kahlotus Road.

The Sheriff's Office reported that at least one home and an outbuilding burned Monday evening.