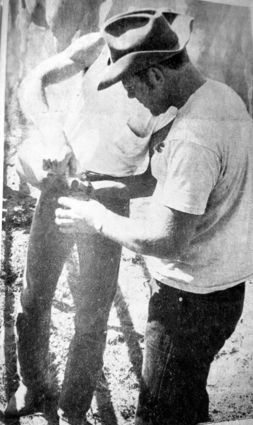 A photo from 50 years ago - CANNED LIGHTENING- Faster corral gates and faster cowboy-horse teams are expected this weekend at the first renewal of old-time, famous Ritzville rodeos. The new grounds are just east of town - follow Main Avenue out. Jake Harder held oil can as Dan Brown filled it.

Washtucna is a thriving, progressive little city, one of the most substantial in the county. Steady improvement is being made in its streets and business buildings and the stores are a credit to the town. At one warehouse we found 40,000 bushels of last year's wheat that big ranchers were holding for higher prices. They let $2.60 a bushel go by, but their patience may be rewarded by the desired $3.00. About 400,000 bushels of grain is warehoused at Washtucna annually. Harvest is not over yet in that vicinity. Many of the big operators have good sized runs yet to make.

Firemen Cause of Alarm

Ritzville's firemen can't even start a friendly little weed-burning of their own without having someone turn in an alarm! A group of fire laddies took the country truck to the Texaco station at the west city limits Tuesday night to clean up the weeds and had the job nicely under way when the city siren began wailing and a long line of cars headed their way. Someone from a distance apparently thought the service station was on fire and turned in the alarm.

Fred Kupers and Reuben Schoessler "laid down" their road graders Monday and quit work. For both men, long-time employees of the Adams County road department, it is well-earned retirement. Fred began part-time in November, 1929. Reuben, the Lind area patrol operator his entire time on the job, began about 1935. Relief from the jolting, grinding work in the dust will be welcome, said Schoessler. "You can't get over the roads as fast as they want 'em," he added.

"Ritzville Volunteer Firemen are well trained, better than some paid departments," said Lynn Adams, at Monday's practice drill in the Department of Energy's Self-Contained Breathing Apparatus (SCBA) mobile training facility. Adams and Ray Quillen, both safety officers, conducted the drills at the Ritzville Fire Station. Monday's scenario involved a fire in a three-story structure. A small child weighing about 20 pounds was reported down in the building. Firemen were instructed to search and rescue the child. The drill also required the locating and shutting off leaking gas valves in the dark, confined space.