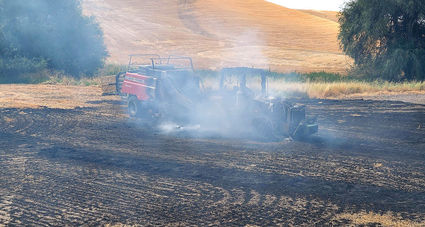 The smokey remains of a tractor and baler remain after a fire Aug. 25.

ST. JOHN – Twelve units responded Tuesday afternoon to a tractor fire that spread to the stubble and windrow straw the tractor had been baling.

St. John Fire District responded to Shields Road, near the Ballaine Road intersection, with three trucks while District 11 supplied nine; three from Colfax, three from Steptoe, two from Diamond and one from Albion.

The tractor and baler it was pulling were both a complete loss according to Steptoe Fire Chief Greg Hall.

The fire also consumed 60-70 acres of stubble and straw, he said. The straw was in windrows for baling which made the response...