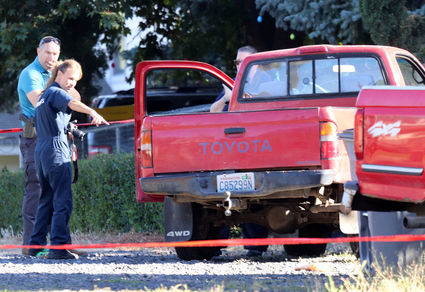 A Spokane County Sheriff's Office forensics technician points out evidence to a deputy at the scene of a shooting this morning at 842 N. Howard St., Medical Lake.

MEDICAL LAKE – One person is in serious condition at an area hospital and two others are being questioned in connection with an early morning shooting today, Aug. 27.

The shooting occurred at about 3:50 a.m., Spokane County Sheriff's Office Cpl. Mark Gregory said, noting it occurred at a home in the 800 block of North Howard Street.

One man was shot; and a man and a woman were detained for questioning, he said, noting that the names have not yet been released.