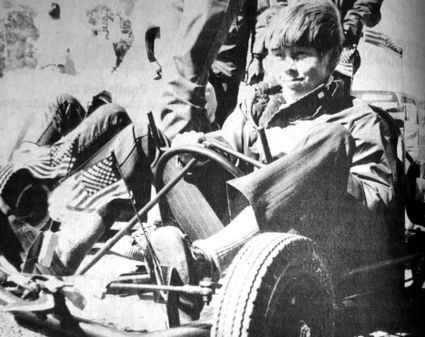 MITCH HILLE nudged his go-cart slowly through Saturday's parade route. Hille declined to predict its speed potential, but admitted the engine is souped. The low-down racer was decked out in American flags. 1970 Journal Times photo.

A shooting occured at Lind last Sunday night. It seems that some man came to the home of Mrs. Deaton in Lind and asked to see her son Howard. According to Mrs. Deaton he threatened the life of her son, and when she refused to admit him and told him her son was not there, he claimed that he was and added, "I'm going to kill him before sunrise." Mrs. Deaton then seized a revolver out of her room, fired through the screen door frightening the man away. It is allege...