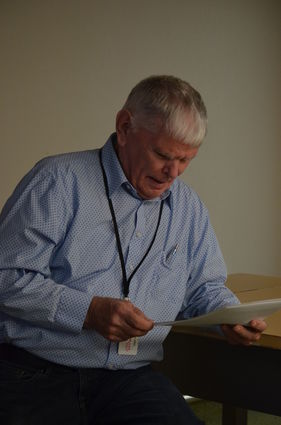 Adams County Commissioner Terrance J. Thompson looks over the first count of Adams County ballots in the primary election Tuesday, August 4, shortly after 8 p.m. Thompson serves on the county canvassing board, which examines ballots in order to determine the final official returns of a primary, and to safeguard the election process.

RITZVILLE - The first count of Adams County ballots in the August 4 primary election show several candidates with strong leads in this early stage of the race.

Ballots counted so far include those received in the Auditors office by Friday, July 31, according to Adams County Elections Administrator Jacque Laird. Total Adams County ballots in the 8 p.m. Aug. 4 count were 1520.

Dan Newhouse has a strong lead to keep his seat as U.S. Representative, Congressional District 4, with 991 votes. Douglas McKinley had 229, and Tracy "Justice" Wright pulled slightly ahead of Sarena Sloot with 85 vote...