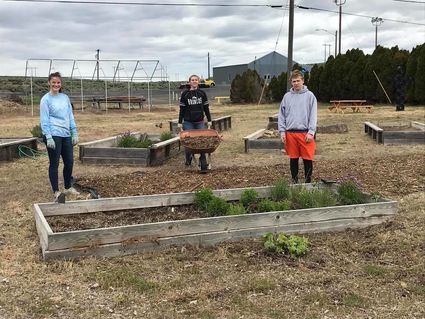 Kaylee Monroe, Amy Anderson and Roland Zornes volunteer with Antionette Morton at the Lind Community Garden on May 22.

LIND – The community garden is growing this year with a lot of hard working hands.

"It's for the town. We wanted to teach people to grow their own food," said Organizer Barbara Devore, adding the first planting was in 2013. "We hoped to eventually have a kitchen where we could do demonstrations on preparing the food."

Devore said the community garden pays for the water through donations. Growers, however, have been discouraged by others harvesting their hard work.

"We are hoping to get a grant and fence it," said Devore. She's also hoping to add a small, grassy area this year.

"I just want it to be a place for people to come relax, and enjoy; a way to bring the community together," said Devore. "We always offer produce to the seniors. And we're thinking of adding a chicken pen. We could sell the eggs to help the cost of the garden." Devore laughed, saying they had lots of ideas, but were just short of volunteers and time.

"Even if people only weed for half an hour, that helps out," Devore said, adding, "People have fun out here."

Devore said part of her own motivation for keeping the garden going is in memory of her parents and grandparents being from Lind.

"I'm trying to make it nice in their memory. I think small towns are a great place to be," Devore said. She said they have some fun activities planned for kids.

"We've taken what was a patch of weeds over a fill area and trying to make it productive," said Devore. "We have really good soil, but we need more."