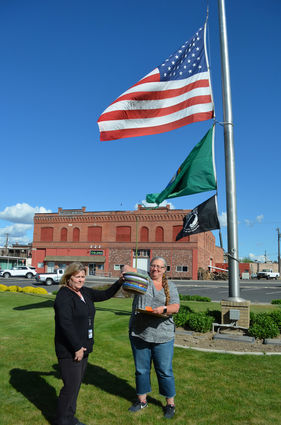 RITZVILLE - The Adams County candidate lot drawing took place on the county courthouse lawn at 4:30 p.m. Friday, May 15, the end of filing week.

The lot drawing determines the order in which a candidate's name appears on Aug. 4 primary ballots.

"I have been in elections since 1996, and this is the first time we have held a lot drawing outside," Adams County Auditor Heidi Hunt said. "We did this outside of the courthouse building so the process would be accessible to the public, because the public's not allowed in the courthouse.

"It's really important the public knows they can participate in the elections and the voting process."

In the race for District No. 1 county commissioner, John N. Marshall's name was drawn to appear first, followed by Dan Blankenship and then Glen R. Stockwell.

The Top 2 candidates in the primary advance to the Nov. 3 general election ballot; they're listed in order of votes received in the primary.

In the two commissioner races, only the voters in the commissioners' district will be voting.

"The PCO's (Precinct Committee Officers) will not go to the general election, they'll only get voted on in the primary," Elections Administrator Jacque Laird said.