Newspaper stories for week of May 20 from years past 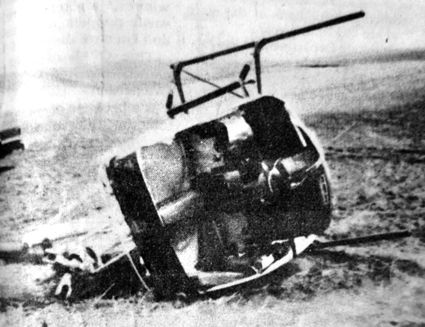 Bill Loomis and Brad Shaffer of Lind were in this helicopter when it crash near Lamont 25 years ago.

The 15th annual banquet of the Ritzville High School Alumni Association was held at the K. of P. hall last night, 39 graduates of the RHS being present for the festivities. Carl C. Clodius acted as toastmaster of the program. Following the program, the guests adjourned to the Home Cafe, where a delicious menu was served. After the "eats" they returned to the hall where the balance of the evening was spent in dancing and singing.

Pvt. Robert Herring, son of Mr. and Mrs, Ralph Herring of Palouse, former Ritzville resident and husband of the former Verna Schafer of Ritzville, was wounded on Okinawa April 28 when struck by three hand grenades, according to a letter received this week by his wife. He did not reveal the full extent of the wounds in his letter but said that he was struck on the left shoulder, legs and foot and is now recovering in a hospital on Saipan. In describing his misfortune, Private Herring wrote, "The Jap threw 10 hand grenades and three of them hit me, but I got even - I put 22 holes through him with my Browning automatic rifle and he looked like a sieve."

Washtucna - The W.L. Fisher Ranch near Washtucna is being used as the backdrop for an Atomic Energy Commission motion picture about ecology in the drylands. Footage shot at the ranch will be incorporarted into a film titled "Arid Lands" for showing to conservation societies. Tom Breemer, freelance photographer doing the shooting, has credits which include "Lassie" television show segments and episodes, and more than 30 wildlife documentaries and outdoor films.

Two Lind men, Bill Loomis and Brad Shaffer, are lucky to be alive after their helicopter crashed in a plowed field. The accident occurred seven miles north of Lamont in Whitman County at approximately 9:45 a.m. Loomis was airlifted by MdStar in Spokane, while Shaffer was taken by the Sprague ambulance to the same location with minor injuries.