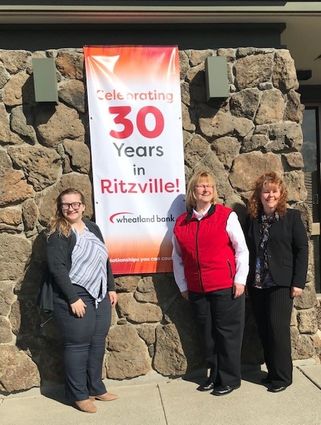 RITZVILLE - Wheatland Bank is celebrating it's 30th anniversary this month, with treats handed out to customers at the drive-through window throughout the month of May.

Wheatland Bank, a locally owned and independent community bank opened in 1979 in Davenport. The Ritzville branch was the fourth one to open, in May of 1990, following branches opened in Wilbur and Odessa.

"Prior to Ritzville opening, Wheatland Bank only had branches in Lincoln County," Dolly Blankenship, Service Manager in Ritzville, said. "In the years since, Wheatland Bank has opened 10 additional branches located in eigh...