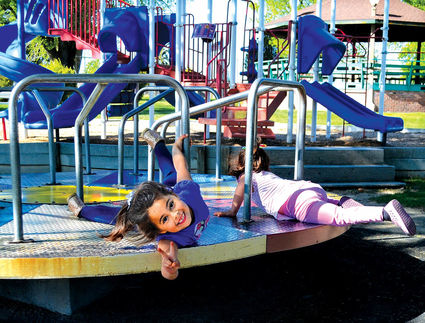 Grace Ramirez, 6, of Tri-Cities, celebrates the opportunity to ride the old-fashioned Merry Go Round with her sister, Francesca Ramirez, 4. The City of Ritzville opened the park last week after Jay Inslee relaxed his restrictions.

RITZVILLE - The city has signed onto an Adams County Commission letter requesting a variance from Gov. Jay Inslee's quarantine orders.

Mayor Gary Cook explained the letter to the City Council during a May 5 meeting.

The letter requests a variance from the state Department of Health allowing for Phase I of the governor's plan to reopen the economy here.

As of Monday evening, only eight counties - Adams, Ferry, Pend Oreille, Columbia, Stevens, Wahkiakum, Skamania and Garfield - had successfully been granted a variance.

As of press time, they had not yet received an order from the state on h...