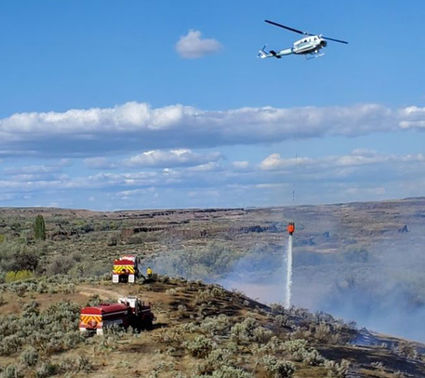 A Department of Natural Resources helicopter is seen fighting the wildfire in Adams County, with Grant County Fire Districts 10 and 11 water tenders in the foreground.

OTHELLO - A fire that grew to an estimated 150 to 200 acres after being started on private property was initially contained around 7 p.m. Thursday, April 23.

Adams County Fire District 5 Chief Gary Lebacken said the call for the fire came in at 1:19 p.m., and about a dozen District 5 volunteers and paid staff turned out.

Lebacken said the fire was human-caused...