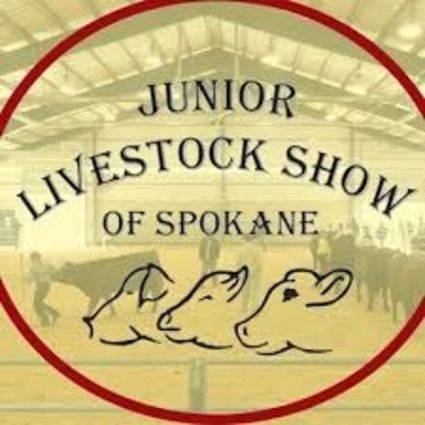 The 2020 Junior Livestock Show of Spokane will be taking showmanship to the computer screens with a virtual experience for exhibitors.

Due to the cancellation of all scheduled events for May at Spokane County Fair and Expo Center, the traditional livestock show was put in jeopardy.

The Board of Directors of the Junior Livestock Show of Spokane made the decision on April 5 to move forward with a virtual format for the show and omit a livestock sale.

"Going to a virtual show is a learning experience for all of us," said show manager Lynn Cotter. "We had a lot of back and forth on what to do with this year's show. We have an 18-person board, so we had a lot of ideas and thoughts being thrown around."

Exhibitors may enter their videos starting April 27 to the originally start day of the show, May 5. The deadline for all videos entered is between 7 a.m. to 8 p.m. May 5.

All videos that are submitted of exhibitors showing their animals will be only made available to the judges, they will not go public.

"Since minors are in these videos we can't have them out to the public for safety concerns," Cotter said. "The results of the show will be made public and should be on our website and Facebook page at least by the day after the event, May 7."

Awards and placements will be given as well as feedback to every animal submitted.

Ag teacher and FFA advisor at LaCrosse High School Lisa Baser said that once the board of the junior show realized that the traditional show was not possible, they felt it was important to give the kids something to participate in.

"We will have a company from Arizona that will be taking this project on and processing the videos," Cotter said. "The videos will be uploaded through this different platform and put on a website, only accessed by the show's judges, where the judges will be able to go through and give out the awards."

Video requirements include showing all views and angles of the animal, having the video be 60 to 90 seconds long, fitting the animal as if the exhibitor was going into a live show ring, etc.

"One thing I'm afraid of is those who would've attended the show in person and now that's virtual they may not have the same access online," Cotter said. "If they don't have access to video or this new platform they can take photos of their animal and send it to my email, so they can still get credit."

According to the Junior Livestock Show of Spokane Facebook page, all entry fees will be refunded unless the payee wants to donate the fees. Also, the fairgrounds will be refunding camping fees as well.

"Most of the shows in the area have canceled and I think it leaves exhibitors and their families a little lost on what to do," Baser said. "This virtual show is a way for kids to keep working with their projects towards an end goal of some sort of show."

Cotter said the board of directors is hoping the kids will still have fun this year. She said that if they just canceled the event altogether, a lot of kids would lose interest in their projects that they have worked so hard on.

For LaCrosse High School, Baser believes that all of her students will be showing in the virtual show. She said she believes this will give a lot of them, especially the seniors, a sense of closure.

"I will be participating in the virtual show because it will still give me an opportunity to showcase my hard work," said LaCrosse senior Lauren Stubbs. "Additionally, I am grateful that we have the virtual show as an alternative way to compete with our projects."

Stubbs has been competing in the Junior Livestock Show of Spokane since the third grade. This year she will be showing a market steer and a market goat.

While Stubbs is grateful for the opportunity to continue with her projects virtually, there are some aspects of the event that she will miss for not being there in person. She said she will miss competing in the FFA State Livestock Evaluation Career Development event with her teammates, showing her livestock projects that she has been raising for the past seven months, seeing members from other chapters in the area, as well as the anticipation and excitement of going into the show ring and the atmosphere of the show.

"I'm going to miss being a part of the long-standing tradition that accompanies showing at the Junior Livestock Show of Spokane, especially due to the fact that because I am a senior, this was my last show," Stubbs said.

Due to the online format for this show, a livestock sale isn't an option on the grand level. Baser said she feels that it's important for others to know that many kids are still trying to sell their animals, even if they can't at the actual show.

"I would encourage those who want to purchase an animal to contact their local 4-H leader or FFA advisor," Baser said. "The junior show is still gathering support money to be distributed to exhibitors as well. Individuals or businesses interested in supporting an individual exhibitor or a group of exhibitors can contact the junior show directly to do so."

In an effort to help these kids sell their animals, businesses in the area are offering discounted fair/show animal rates for those who purchase these animals. Outlaw Meats in LaCrosse and Mountain View Custom Meats in Coeur d'Alene are offering discounts by appointment for animals that were registered to be in the show.

"These kids have invested hundreds and in some cases thousands of dollars into these projects and we want to do what we can to make sure they at least break even," Baser said. 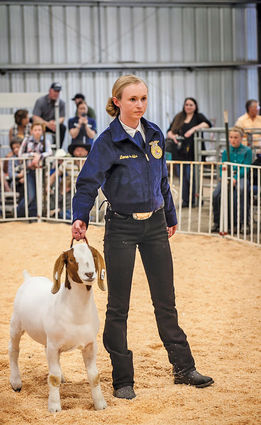 Lauren Stubbs shows her first goat from her own herd at the 2017 Junior Livestock Show.

Stubbs expressed her gratitude for communities in the area and their support of 4-H and FFA livestock projects.

"We invest much of our time and effort not spent in school or extracurricular activities into our livestock projects," Stubbs said. "Having the ability to exhibit our projects gives us an opportunity to show off what we have accomplished. The Junior Livestock Show of Spokane gives us a platform to be evaluated by some of the most knowledgeable livestock judges in the industry, as well as compete against some of the best showmen in the area."

Stubbs said that shows like the Junior Livestock Show of Spokane instills the timeless values of hard work, responsibility, taking pride in one's accomplishments and also on how to be humble in victory and gracious in defeat.