Inslee: 'We will get through this' 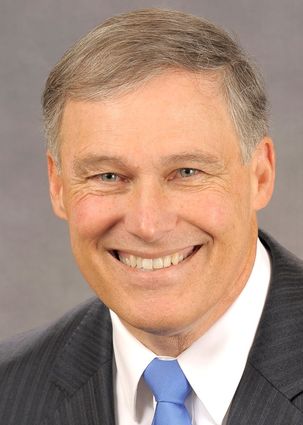 SEATTLE - If Washington is to stop the spread of coronavirus and the disease it carries, COVID-19, the most important step is to essentially keep our distance from each other.

That was the most important aspect of personal protection outlined by Gov. Jay Inslee and others at a Monday, March 16, press conference in Seattle. That includes not only health directives to maintain a "social distance" of a minimum of 6 feet between each other, but also evaluate our routines and if at all possible, simply stay home as much as possible - especially if under age 60.

That advice was echoed by others on the podium with Inslee.

"Self-isolate, stay home," Snohomish County Executive Dave Somers said. "Even though you may not know someone who is sick, please take these precautions."

Somers said the responses taken by his county along with King and Pierce counties and subsequently extended statewide by Inslee on March 13 are guided by science and advice of health professionals. Last Friday, Inslee announced the closure of K-12 public and private schools March 17 – April 24 and the limiting of public gatherings to no more than 250 people.

At the press conference on Monday, Inslee said the further restrictions were effective at midnight and would run through March 31 for now. The order to shutdown includes restaurants, food courts, bars and taverns, wine, beer and spirits tasting venues, doughnut shops, ice cream parlors, coffee shops and sit-down airport restaurants and bars.

King County Health Officer Jeff Duchin said they expect the number of confirmed cases of the virus to double every five days right now unless more stringent action is taken to limit its spread. If the action is not taken, the number of cases could exceed the capacity of the medical system's ability to treat.

Duchin said it was particularly imperative for those at less of a risk of catching the disease – which according to state Health Department statistics are those under age 30 – to also maintain social distancing and if possible self-isolate as they may be carriers and not realize it. According to the department, only 7 percent of the 749 confirmed cases as of March 15 are ages 20-29 with 2 percent 19 and under, while 16 percent are ages 50-59, 14 percent ages 60-69, 18 percent ages 70-79 and 20 percent over age 80.

"What they do impacts the health of the community," Duchin said of of those under age 30.

Inslee said they are attempting to build the medical system's "surge capacity" in order to handle increasing numbers of cases. With more testing beginning to take place and the confirmation of cases spreading across the state, officials are making plans for that possibility.

Inslee finished his remarks by noting the state has faced similar challenges in the past, and will eventually find its way through this challenge.

"That day is going to come," he said. "We will get through this."

John McCallum can be reached at [email protected]