By Roger Harnack and Jeremy Burnham
The Journal 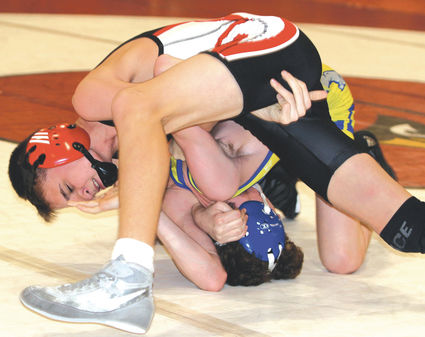 District champion Brandon Davis drives Jason Sisk of Colfax to his back in the 106-pound championship bout.

Two gold medalists - Brandon Davis at 106 and Johnny Ryan at 113 - lead the Lind-Ritzville/Sprague team (153 points) that finished behind champion Liberty (Spangle) with 297 team points, runner-up Davenport with 246 and third-place Reardan with 168.

The Broncos finished well ahead of fifth-place Colfax, which had 71 team points.

Northwest Christian (Colbert) was sixth with 55 points, edging Pomeroy with 54....