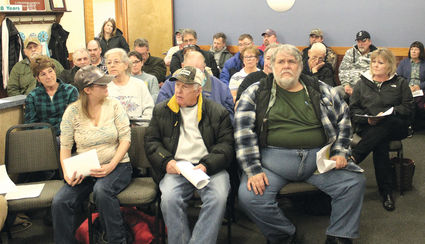 Residents filled the seats Monday night during a meeting on quieting trains as they travel through Ritzville.

RITZVILLE - Every seat was filled and some residents stood as more than 30 people squeezed into City Hall for a public meeting on turning the city into a train quiet zone last Thursday.

The meeting was called for by Mayor Gary Cook, who said the purpose was to give everyone a chance to be heard.

"It gave me the opportunity to let people have their say," Cook told The Journal after the meeting.

Cook said he hoped the meeting would allow people to hear from the other side of the issue.

"There are groups that only want to see things one way because it's their a...