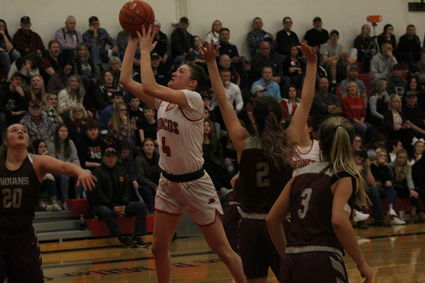 LRS's Eliza Galbreath takes a shot during the Lady Broncos' 54-28 win over Reardan on Jan. 28. With the win, the team improves its league record to 8-2 on the season.

The LRS Lady Broncos have taken two big steps toward wrapping up the No. 2 seed in the district tournament by winning two more league games. The Lady Broncos beat Asotin 53-13 on Saturday and Reardan 54-28 on Tuesday.

The two wins make LRS 8-2 in league play, behind only Liberty. Liberty is 8-0 and handed LRS its only two league losses of the season.

The loss by Reardan puts the school at 5-4 and drops the Indians from the No. 3 seed as Colfax picked up a win against Upper Columbia Academy to improve to 6-4 in league play.

The Lady Broncos game against Asotin was decided by halftime. Asot...