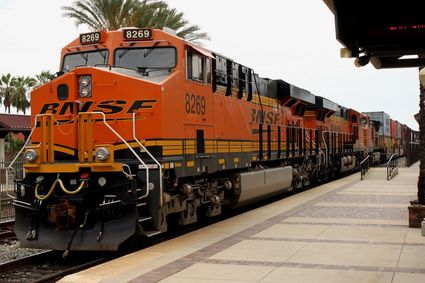 The Jan. 21 Ritzville City Council meeting started off on a familiar note, as the debate about designating the city as a quiet zone took center stage.

The topic of the quiet zone resurfaced after a group of residents wrote a letter to Mayor Gary Cook earlier this month that they asked to be read into the council minutes. In the letter--which was signed by E. Hank Buchmann, Rebecca S. Buchmann and Tracy M. Tremaine--the group asks that the quiet zone issue "be moved to the forefront of all Ritzville agendas."

"The railroad, though a valuable component to Ritzville's reputation, history and partial economy, the continuous--nearly endless--nuisance of screeching signal whistles is a conversation long past committee work, surveys, letters to the editor, but rather deserves immediate action," the letter reads. "It is a community issue, not an issue to be benched or negotiated by adding pork-barrel add-ons, or waiting for an Amtrak contract."

The letter also asks about the city-sponsored survey that was conducted late in 2019, and the process that the city used in determining which people received surveys and which ones didn't.

Cook told the group--which was in attendance at the council meeting--that the city used its utility billing accounts as the basis for determining which addresses to mail the surveys to. He clarified that physical copies of the surveys were only sent to addresses inside of city limits, because that's as far as the City of Ritzville's jurisdiction extends.

"The survey was designed for the ratepayers within the city, so each household at least should have gotten one," Cook said.

Among other topics, the survey included questions about the quiet zone issue. About 41% of respondents said it was either extremely or very important for the city to be designated as a quiet zone, with an additional 23% saying it was somewhat important. The remaining 36% said it was not important at all.

The next step in the quiet zone process is a public meeting, which will be held at Ritzville City Hall on Feb. 6 at 5 p.m. At this meeting, Cook said that the feedback received, factored in with the survey results, would play an important part on deciding whether to continue moving forward with the process that would ultimately lead to designating the city as a quiet zone.

"I believe in the process," said Cook. "I believe in the larger portion of the community having a say in what happens. And so I want to--and maybe it's just for my own satisfaction--but I want to make sure that 51% or more are in favor of this before we move ahead, because we're going to be maybe hundreds of thousands [of dollars] into it ... I don't plan on dropping it, but I want to be able to determine where everyone is at, and my personal feeling is that we're going to move forward [with the process]."