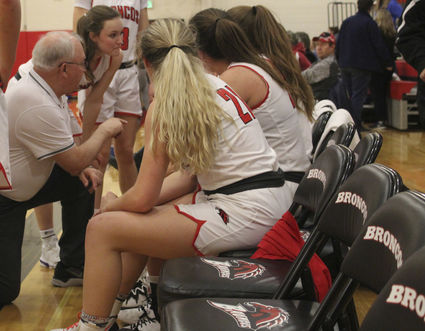 Lady Broncos head coach Steve Wellsandt coaches up his team during their 67-19 win over Tekoa-Rosalia on Jan. 21.

The Lind-Ritzville/Sprague girls basketball team fought for most of the game, but fell to Liberty on Friday, 45-37 in Spangle. On Tuesday, the Lady Broncos defeated Tekoa-Rosalia 67-19 at home.

Before the season, LRS head coach Steve Wellsandt identified the Liberty Lancers as his team's toughest opponent of the season.

As the season progressed, Wellsandt said he feels his team has gotten closer and closer to where they need to be to compete with Liberty. On Friday, his players showed a little of that.

LRS hung with the Lancers early and finished the first quarter down 10-8. The Lady Bronco...